Oaks Park High School in the London Borough of Redbridge have won a Janet Video conferencing Award for the "Best Example of Enhancing Learning".

The judges thought that "OPHS created video conferences that dealt with current issues including renewable energy and the London riots, for a variety of age ranges.  Their programme demonstrated continual development over the six years that they have been actively involved in video conferencing. Additionally, they have pioneered the use of video conferencing outside of the classroom, developing knowledge sharing networks in their community"

OPHS have worked on many international, national and local VC projects and events.  They have carried out over 100 conferences. Linking to Antarctica, Parliament, London 2012 Paralympians, Philosophy and Economics A-level tutors to name a few.  They have made VC partnerships with schools all over the world including USA, China, France, Spain and Canada. OPHS have brought authors into the classroom and shared links via VC with schools locally and regionally - click here to read more.

The award was presented to Ms Hayes, Learning Resource Centre Manager pictured below with and Mr Hawthorne, Assistant Headteacher of OPHS, at the National Space Centre in Leicester by Anu Ohaj, Director of Education and Nic Damon from Polycom who sponsored the awards during the Janet 2012 VC User Conference. 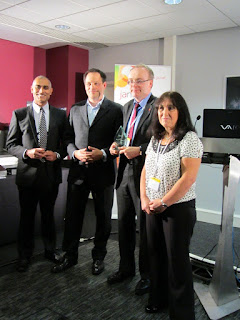 Well done Oaks Park High School - We are all very proud of you.
Posted by Mina Patel at 14:15