The UK VC Partnerships Group working with JISC (UK) streamed the National Awards live across the internet at 3.30pm on Wednesday 13th May 2015.
The winners from across the primary, secondary and HE sectors showcased what they have done for teaching and learning using video conferencing to win their national accolade. Richard Sedding, Chair of the group, alongside other members from all over the UK joined a multipoint conference through JISC, as the trophies were presented to the three winners below. 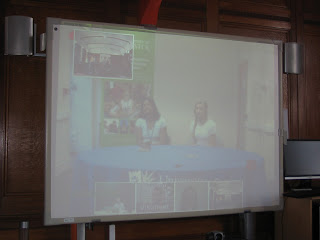 Bristol University working with Virtually University, has been collaborating with secondary schools all over the UK to connect their under-graduate law students to KS4 students through the widening participation programme.

As part of The University of Bristol’s outreach programme*, Holly, Polly and Kieran set out to facilitate conversation, encourage participation, increase confidence and to raise aspirations in terms of University education, whilst stimulating interest in law and human rights. Holly one of the university students spoke about how she found using video conferencing a very positive experience, "Its so easy to connect to four schools at once and hear other young peoples views is a real bonus. Its a great opportunity for the schools to receive immediate feedback and have discussion with each other as well as with me."
Holly also adds, "our University has encouraged law firms to carry out 'virtual interviews' with students, this had made a huge difference to us when we are looking for work placements and gives us more opportunities to apply for positions that we may not be able to travel to for interview." 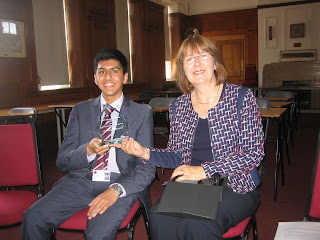 Kate Hitchcock, Deputy HT with former GCSE French student, ICHS
﻿
ICHS have travelled over 10 thousand virtual miles over the last year with most of their 900 students being involved in at least one virtual journey, from Global energy debates with Hong Kong to GCSE Astronomy lessons with the National Space centre. These experiences would not be possible without the video conference equipment and connecting through JISC.
One of the key subject areas ICHS worked on, was, to raise the attainment of pupils in spoken French. Video Conferencing was set up with College Jules Ferry in Beaune, France for students taking GCSE French. The sessions continued through Years 10 and 11 with one session every half term. Students were then able to hold conversations in real time, the French students being able to practice their spoken English and ours their spoken French. Students had the opportunity to ask questions about the intricacies of each other’s language. It goes without saying that the best way to learn a language is by visiting the country of origin but the video conference process was a fantastic substitute, avoiding the need for risk assessments and passports! Confidence of pupils when participating in oral activities certainly increased as a result of this initiative. There were 7 double linguists who participated regularly gaining 3A*s and 4As at GCSE.

One student commented: "I thoroughly enjoyed having the opportunity to talk regularly to French students video conference. As a Foreign language student, it is useful to witness the culture in order to enforce the learning and understanding of the subject. This is not always possible to pick up from a textbook and it is not economically viable for a school to fund international educational trips. Video conferencing is a solution to this problem as you can be in France, without having to leave the classroom. Not only were we able to improve our lingual skills, we were able to engage in discussions regarding local culture and customs, which is interesting to discover. Being able to interact with other students from other countries really made the learning fun."

The project is the CLC and Yorkshire VC using video conferencing technology with it’s local schools or it’s second CLC, on a series of topics selected by the participating school.

Each session is customised to fit into the schools current teaching theme or project. The project has been running over the last 15 months and is working to expand across other local authorities. It runs session for all the primary key stages, FS to Y6

A sample list of sessions and objectives run over the last few month with Yorkshire VC.Professor Parchments, from a school not unlike Hogwarts - Literacy - The use of descriptive language and rhymes. Lycos, a Hoplite warrior - Historical - Children's life in Greek times. Conservation - Literacy - Persuasive Language - An oceanographer leads the debate about saving dolphins or sea turtles. An alien - Literacy - Fantasy worlds and Alien species.
Pandora - Literacy - Greek gods, myths and legends.

Local schools have welcomed the new opportunites from the CLC and have embeded the sessions into their new curriculum topics. VC is not considered a "one off event", it is something the schools use as a regular resource.


The UK VC partnerships group wish to thank all education establishments for entering the awards. Well done to you all !
Posted by Mina Patel at 00:35